St Kitts and Nevis is the only federal state (a country using the system of federalism) in the Caribbean.

This is because St. Kitts and Nevis is comprised of two islands!
Take a look at this picture: 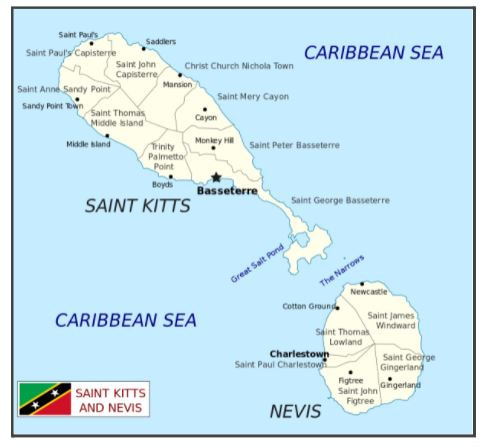 The capital, Basseterre, is located on Saint Kitts island, the bigger of the two.

“St Kitts” was originally named “Saint Christopher.”
Because “Kitt” was a common nickname for Christopher at the time, people began calling the island “St Kitt’s island,” which was later changed to simply, “St Kitts.”
“Nevis” is derived from the Spanish word “nieve,” meaning snow.

English is the official language of St Kitts and Nevis.
However, many residents speak Saint Kitts Creole casually.