Japanese is made up of three alphabets:
Hiragana and katakana (collectively known as kana) are fairly easy to learn. They are used much like our alphabet; sounds combine to form words.
​
Kanji, on the other hand, is more like a picture. You look at a picture of an apple and immediately recall how to say apple, even though it is not spelled out for you.
Example of Hiragana: ​ひらがな
Example of Katakana: カタカナ
Example of Kanji: ​日本
Even though kanji doesn’t spell things out, some words can give you hints on how to pronounce it.

For example 日本 (にほん; ni-ho-n) can be broken down into two different kanji.
日 means either sun or day and has a common pronunciation of “に”.
本 has multiple meanings, but the most common are book and origin; it is pronounced “ほん” most of the time.
Knowing this, you can easily see that it means “land of the rising sun,” which is the word for “Japan.”

If you recognise the characters, but still aren’t sure of which pronunciation to use, it’s not the worst thing in the world. Maybe you accidentally say “ni pon,” “ni bon,” “日の本 hi no moto” etc… it may not be correct (exception of ni pon) but it still has the same general meaning.

​
Radicals are a way to organize and break down kanji. Keep in mind, radicals are NOT letters and won’t combine to make certain sounds. 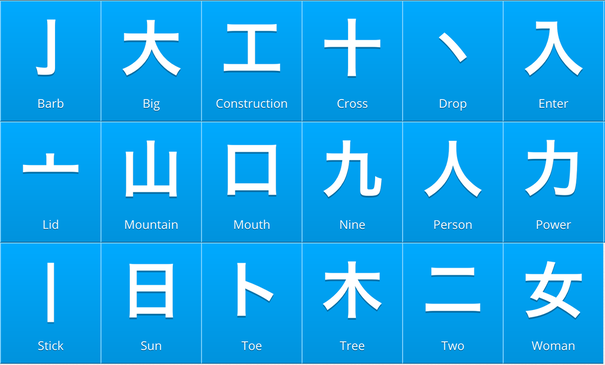 Radicals (from WaniKani)
Which, side note, Wani​Kani is an absolute wonderful resource for learning Japanese.
Highly recommend.
There are different ways to pronounce certain kanjis.
The pronunciation can be differentiated by Kunyomi (訓読み) and Onyomi (音読み).
Yomi means reading.

Most kanji have both a Kunyomi and Onyomi reading; however, some kanji only have either an onyomi reading (like, ‘ 秒 ‘ meaning second), or a kunyomi reading (if the word was created in the Japanese language; like ‘ 畑 ‘ field of crops) .

山 means mountain. Its Kunyomi reading is “yama” and Onyomi is “san.”
Some kanji may have multiple on and kun* readings (such as 日).

*onyomi and kunyomi are often abbreviated as just ‘on’ and ‘kun’*

There are no “rules” that indicate which reading should be used. In this case, practice with the language is your best bet.

The “dakuten” (two slanted lines; voicing mark) on top of a kana indicate that the consonant of the letter should be voiced (b, j, k, etc.)

Ya, yu, and yo (ゃゅょ),  are the most common. They are combined with other kana to make sounds like “nya” “gyu” “ryo” etc… These are diphthongs. We have diphthongs in English too.

Words like “side” and “coin.” diphthongs are where two vowel sounds are smooshed into one syllable. Notice that “nya” is not “ni ya” and “gyu” is not “gi yu.”

Chiisai kana such as ァィゥェォ (a, i, u, e, o) are used as diphthongs with borrowed words like “file: ファイル.” (fua-i-ru)

There is a choonpu (long dash) that prolongs the sound of a vowel. It is seen mostly in katakana and rarely in hiragana. It should not be confused with the kanji for “one.” 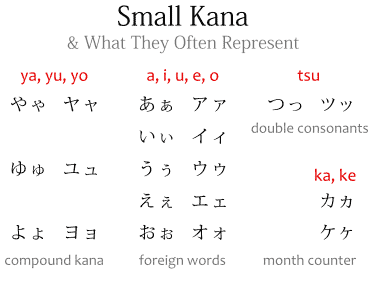